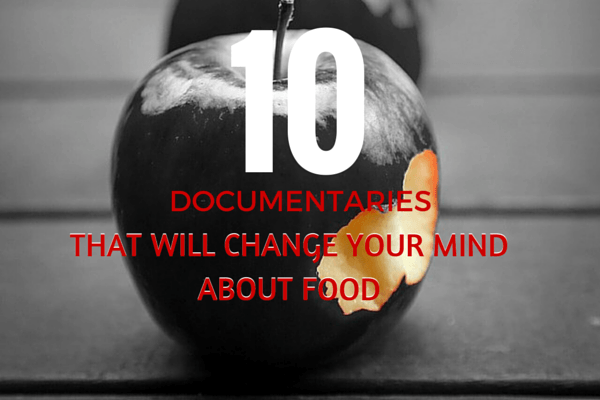 10 Documentaries That Will Change Your Mind About Food

In a culture obsessed with food, it’s often difficult to navigate through all the options and make healthy choices. Processed ingredients and unbalanced meals are often hiding under the seemingly harmless “all natural” labels. And considering that the U.S. government is about to annul over 40 years of cholesterol warnings, you can tell that there is a lot of confusion and opinions about what comprises a healthy diet. At this point, you owe it to yourself (and your body) to do the research and find out more about what you are eating. To help you get started, here are top ten food-related documentaries that might be true eye-openers.

Produced back in 2004, Super Size Me is categorized under documentary, comedy and drama on IMDb, and it’s truly a little bit of each. In case you haven’t seen it, it follows a man who, for the sake of an experiment, decides to only eat in McDonald’s for one month. You will see what kind of changes he experienced, both physically and emotionally, from such a diet. You probably know by now that fast food is “bad for you,” and this movie will show you exactly how bad. Of course, a lot has changed since 2004 and most fast-food chains have introduced healthier options to the menu. However, portion sizes have not diminished and the majority of the food served in such places is heavily processed, because this is what makes it “fast.”

Food, Inc. was released in 2009 and is still relevant as ever. It talks about the food sold in U.S. supermarkets, where it comes from and how it gets there. This movie reminds us that food manufacturing is an industry that aims to be profitable, often more than it aims to be responsible. And there is legislation in place that protects food manufacturing giants instead of protecting people from unhealthy foods. However, remember that as a consumer you have the ultimate power over where to shop and what to purchase.

It seems like 2009 was a great year for health-related documentaries, because Fresh is another one worth watching. This movie covers many of the issues raised in Food, Inc., zeroing in on such problems as use of pesticides in agriculture and environmental effects of mass manufacturing of food. However, this documentary also talks about solutions, i.e. how to make organic, locally grown foods more available to the public and your role as consumer in supporting independent farmers.

We learn in school that our bodies are70- 90% water. After watching this movie, you’ll realize that we are actually 50% corn—that’s if your typical diet consists of the processed foods you buy in your closest supermarket chain. Corn is really cheap and easy to grow, and it can be modified and used in many ways besides the corn on the cob and canned corn. In fact, some sort of derivative of corn is in most mass-produced foods, whether it’s corn flour or high-fructose corn syrup. Knowing where to look for “hidden corn” is an essential skill these days.

If you think that Food, Inc. was graphic, you probably wouldn’t want to watch Our Daily Bread. This is a rather minimalistic documentary made by a German director. It doesn’t have an accompanying narration—all you see is live footage from various commercial animal farms that produce meat for your supermarket freezer section. If you are a vegetarian, you might shed a tear a few times while watching this movie. If you are not a vegetarian, be warned that you might never look at a steak the same way again.

This is one man’s personal journey to better health. Fat, sick and nearly dead, although it sounds a bit dramatic, is where many people find themselves before deciding to change their lifestyle and diet. This documentary follows a man who decides to turn his life around and go on a 60-day juice fasting trip around the U.S. in efforts to lose weight, become healthier inspire other people.

If you combine “vegan” and “educated” that’s exactly what you get—”vegucated.” This documentary film is about three meat-loving New Yorkers who took up the challenge of following the vegan lifestyle for 6 weeks. During the process, they also learn a lot about the value of proper nutrition and decide whether they want to stick with this new diet or go back to their old ways.

This documentary really hits the nail on the head in regard to how the food we eat fails to satisfy nutritional needs of our bodies. By consuming a bunch of empty calories from fatty pizzas and sugary drinks we curb the hunger but miss out on vital nutrients. And diet foods and drinks are no better despite the promise of harmless and guilt-free enjoyment. Spoiler Alert: the “fat, sick and nearly dead” guy makes an appearance!

“Food Matters” makes an attempt to expose the connection between the food industry and the drug industry. And considering that both of them are governed by the infamous Food AND Drug Administration, the ties are undeniable. Have you gone to a doctor for indigestion, heartburn or high blood pressure recently? Did you know these are some of the conditions that can successfully managed with the right diet? Yet you were probably prescribed some pills that made you feel better for a little while. If you are tired of going back for more prescriptions, then watch this.

“Forks over Knives” encourages viewers to put down their meat knives and switch to plant-based foods. They do make a good case for it, citing the alarming heart disease and other statistics. Genetics does play an important role in our health, but genes are not a sentence. If you don’t take control of your own health and nutrition, who will?

Do you have any other documentaries you think would fit well on this list? Feel free to list your suggestions in the comments!

See how our comprehensive approach can help you

A wellness center for holistic health in  Pikesville, Maryland