Understanding Gluten: Is Gluten-Free Diet Right for You?

“Gluten” is something everyone has heard of but not many people truly understand.  You see all those “gluten-free” labels on products in the grocery store and hear another girlfriend going on a “gluten-free diet,” and you probably get the idea that gluten is this horrible thing you shouldn’t be eating. Before we jump to any conclusions, let’s first figure out what gluten is. 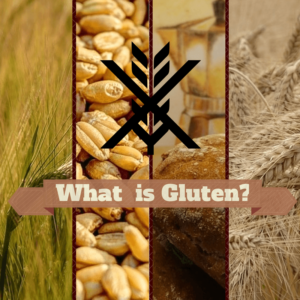 Don’t worry, it’s not the chemical-laden glue you used to keep that shoe from falling apart. Gluten is a term used to describe a variety of proteins that help foods maintain their shape and spongy texture. Gluten is found in wheat, barley, rye and triticale. And because there are so many foods, both whole and processed, that rely on the above ingredients, gluten (in some form) is a part of everyone’s diet unless you specifically try to avoid it.

Here are a few common foods, often pantry staples, that contain gluten. There are also many other sources of gluten.

Quite often, gluten makes it into many processed foods you typically wouldn’t even think to check for gluten. For example, wheat flower is often used as a thickener in soups and gravies. And you can even find gluten in some candy bars, salad dressings and even cosmetics and medications.

So far, it looks like avoiding gluten would be problematic, so why would anyone try it?

You see, some people are sensitive to gluten. This sensitivity ranges from simple discomfort or allergy-like symptoms to full-blown gluten intolerance also known as celiac disease. This disease occurs when ingestion of gluten causes the body to attack its own small intestine cells that play a big role in absorption of nutrients from the food. Celiac disease can be difficult to diagnose, as it often exhibits itself through a variety of seemingly unrelated symptoms, such as diarrhea, joint pain, migraines, fatigue, etc. It can be hereditary and the only known cure for it is a gluten-free diet.

The gluten-free food market is growing and there are gluten-free versions of almost anything these days. And while these foods were created mainly for people with celiac disease, they are becoming popular with average consumers as well.

Is gluten the bad guy?

When we read a packaging label and see that an ingredient was intentionally taken out, we tend to think it’s for the best. We might even feel like we care about our health when we buy sugar-free, low-fat, diet or gluten-free foods.

However, let’s not forget that when an ingredient is extracted from a food, it often has to be replaced to some extent to compensate for the flavor or texture loss. And whatever it is replaced with might be even worse than the original ingredient: case in point – aspartame in diet soda. While there are no studies revealing any dangerous substitute ingredients in gluten-free foods,  a loss of gluten still has to be compensated for, as it is a binding element. Therefore, many gluten-free foods may contain more fats and sugars to give the product right texture and consistency, which often makes them higher in calories than their gluten counterparts.

Gluten, essentially, is not a bad thing to put in your body, unless you are gluten intolerant. (Trust us, you could do much worse!) After all, grains like wheat and rye have been a part of human diet for centuries, and there is no scientific evidence thus far suggesting that gluten is responsible for any ailments aside from celiac disease. In fact, a recent study has shown that non-celiac gluten sensitivity (i.e. gluten intolerance that doesn’t cause intestinal damage) might not be a real thing.

Can you go gluten-free even if you don’t have celiac disease?

The popularity of gluten-free diet can be partially attributed to success stories from people who follow it. Not only do they feel relief of their celiac disease symptoms, but some also report overall increase in energy levels, cleared up skin conditions and improved digestion.

Whether you self-diagnosed celiac disease or just want to see how much your health could improve without gluten, there are a few things to consider before going gluten-free. By removing gluten from your diet, your digestion might indeed get better, but you could also unknowingly deprive your body of essential nutrients. Gluten-free foods tend to offer a good calorie intake but at the same time they are low in vitamins and minerals. Also, by eliminating some food groups (like bread) entirely due to them containing gluten, you might be missing out on other important nutrients.

While going gluten-free might result in a relief of some digestive issues and even weight loss, it’s difficult to pinpoint what exactly prompted these changes. Because giving up gluten also means giving up some unhealthy snacks, certain alcohols and many high-calorie foods, the positive effects you see might not be directly related to gluten.

When in doubt – consult!

If you are blaming bloating, fatigue and stomach aches on gluten, we recommend not making any rushed decisions. Gluten-free diet is a big commitment (and an expensive one, too) and it might not be necessary in your particular case. You can schedule a consultation with Cara-Michele and get a professional opinion before doing something drastic like removing gluten from your diet. If you suspect you might have celiac disease, be sure to talk to your doctor.

From our experience at Women in Wellness, proper nutrition is indeed the key to solving many health issues, but every diet has to be well-balanced.

Have any questions about gluten or want to sure your own experience going gluten-free? Go ahead!

See how our comprehensive approach can help you

A wellness center for holistic health in  Pikesville, Maryland